There is Always a Solution!!!

At times, working through the design process creates beautiful surfaces, but the back is less than desirable for a finished item. In some instances, this can be remedied by adding a backing of textured clay, silk screening etc.

When the ‘crater’ surface of the featured earrings was completed, the back looked like pitted pavement and one of the traditional solutions seemed inappropriate, so I turned to my ‘go to’ backing…paper cocktail napkins or in this case, delicate handmade paper.

Thank you to Dayle Doroshow for the cocktail napkin ‘trick’. Napkins are typically 3 ply and when separated, the decorative top layer is the perfect…translate-quick…solution for correcting the back surface.

In both instances the application is identical.

-Cut a piece of paper or napkin larger than the surface to be covered
-If using a napkin, gently separate the 3 plys
-Apply a thin coat of gloss medium to the back of the earring
-GENTLY place the paper on the wet surface
-GENTLY smooth any wrinkles
-Allow paper to dry
-With a nail file, sand away excess paper from the sides
-Run a gold leafing pen or Prismacolor marker along the sides of the earring. This unifies the front and back surfaces with the sides.

Recently, I added an industrial heat gun to my arsenal of tools. I was singing its praises to one of the coordinators of a polymer group, when she requested that I demo its use…GULP!!! My expertise ends with clearing liquid Kato on the surface of a piece…not the crackle surfaces that I discovered on YouTube.

Oh Well…my motto is ‘nothing ventured…nothing gained’…and whipped out some soft pastels, clay and one of Helen Breil’s texture sheets and gave it a go.

There is a learning curve for timing in relation to the size of cracks…more experiments needed on this aspect. The sheet was 5″ x 5″ and I ‘blasted’ it for approximately 1 minute, moving the gun constantly. Distance from the clay and the gun may also impact the timing. The surface will definitely require some type of sealer…possibly Golden Matte UVLS. 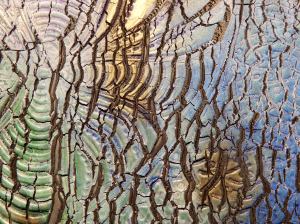 Posted in mixed media, polymer, what if, work in process | Tagged experiments, helen breil, industrial heat gun, laurie prophater, ornamental elements, polymer, what are you working on this week, what if, youtube | Leave a comment

The Curio Has Been Conquered!!!

Finally, after two years of battles and skirmishes, the Curio has been conquered…at least for stencils. Periodic attempts would be made to either deboss uncured polymer or more recently to make stencils, only to end in frustration. Last week, I was determined that, no matter how long it took, the stencil would be conquered.

The pattern that is selected for a stencil has a great deal to do with the success rate. You may need photo editing software to invert the black and white image. Keep in mind that the black areas will drop out, the white areas will remain. In addition, the white areas should be connected and the pattern may need to be cropped and enlarged in order to allow thicker lines in the final stencil. 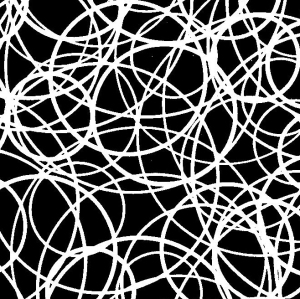 Next step, setting up the ‘beast’…aka…THE CURIO. There are multiple YouTube  videos on making stencils using Silhouette products. Many use a different cutter or software, but the process remains the same.

This stencil was made with a page divider for a three ring binder. It is not as thick as a commercial stencil, but a binding of washi tape should help with stability.

Depending on the complexity of the pattern it may take awhile for the stencil to cut. The featured pattern took over 7 minutes, while several of the stencils shown on Instagram only took a few minutes.

OOOOPS!!! I forgot a very important tip. The drop outs are pesky little shapes that have been rolled onto the sticky surface of the cutting platform. A quick method of removing them is to use the blunt edge of a blade and ‘shovel’ them from the surface. This process takes a matter of seconds…not the minutes I spent removing them after cutting this stencil.

I apologize for the long hiatus between posts. I have been working during the past few months, but there was nothing ‘noteworthy’ to share. Recovery from the eight months of treatment for breast cancer continues in a VERY positive direction. One of the mysterious side effects is ‘chemo brain’, which may take months or even years to subside. While it isn’t debilitating, it is frustrating. Keeping my Charleston Crafts Gallery space stocked with fresh inventory has been my main focus during the last few months.

Relax, have fun, and remember… YOU CAN DO THIS!!!

Posted in mixed media, polymer | Tagged experiments, laurie prophater, polymer, Silhouette Curio, stencils, what are you working on this week | Leave a comment 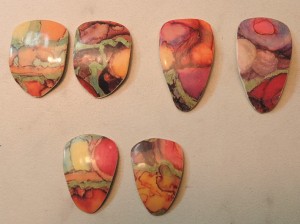 For several years, I have been collecting ‘interesting’ cocktail napkins for use in a variety of applications…typically as a focal design. 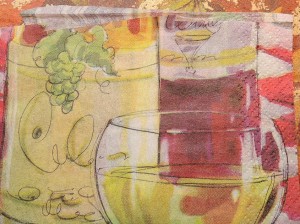 After completing the transfer design process for these earrings, the backs needed something that would complement the front without disturbing the images. One napkin in the ‘stash’ repeated many of the colors found on the front.

To use napkins as a focal element or accent in your work the process is very simple.

Now your design looks interesting from All Angles!!! 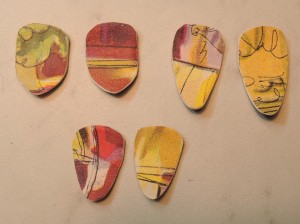 It is amazing how a minor tweak with an accent bead can move a necklace with identical components from controlled to playful. 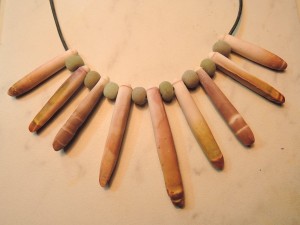 I have been eager to try a mix of ‘rock’ beads with the sea urchin spikes. Initially, I thought blending the colors with the spikes would be most successful combination. While it works…it doesn’t ‘POP’! 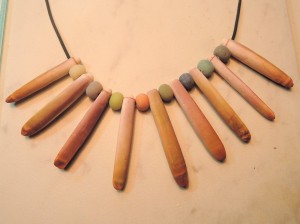 Staring at me from my work surface were the beads that had been rejected in the earlier design. They give the finished design a completely different personality.

I am eager to ‘play’ with Plan C. Paprika mixed with Kato translucent makes a coppery/brown color that appears to match the brown tips of the spikes.  HMMMM…don’t you just love the ‘what if’ road?

FYI: Last spring I shared my breast cancer diagnosis. I am happy to report that the chemo therapy was 100% successful. I start radiation therapy tomorrow, but that has been shortened from 6 to 4 weeks.

My hair is starting to grow back…yikes!!! I think my ‘killer’ wig and scarves will be a part of my attire until I get the go ahead for color. Unfortunately, that is several months away.

Thank you for your messages, gifts and cards during the last 6 months. All of these contributed to the successful outcome. 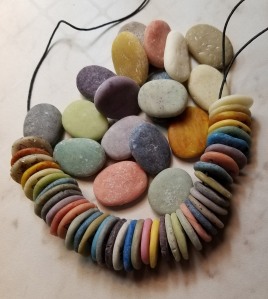 As I mentioned in an earlier post, the studio doubles as a guest bedroom. In early August, my son and his family came for their annual beach vacation. So, the studio was the domain of my teenage grandsons for eight days.

The photo shows the strung clay/inclusion samples and some completed stones. The recipe for each stone is written on the sample disk. This technique is addictive and relaxing.  Perfect ‘zen’ environment when your normally quiet home has been invaded a swirl of activity.

The latest prediction for eclipse visitors to South Carolina is approximately 2 million. Since Charleston is Travel & Leisure’s #1 city in the US, the Charleston Crafts Gallery should be very busy before and after.

Several weeks ago, I started a series that had a solar system ‘vibe’. Thank you to Melanie Muir and her fabulous CraftCast Rock Cuff Class for inspiring the test drive bracelet. No matter where or when I wear the cuff, it always creates positive comments.

Of course, earrings are the best sellers…they followed in short order!!!

The summer issue of Belle Armoire Jewelry, featuring my Spoke Cuff on the cover is still available on newsstands. The article includes full instructions for the Spoke Cuff and 4 additional bracelets.

During our move in 2015, the supplies from two studies were combined. Aside from the duplicates, there were some pleasant surprises buried in the moving boxes i.e Dr. Ph. Martins Iridescent 11R Copper Plate Gold.

This little one ounce bottle sat untouched for almost two years until, I unearthed it looking for just the right gold accent for several of the bracelets featured in the Summer Issue of Belle Armoire Jewelry.

I am adding additional photos from my ‘test album’. This one-stop binder keeps track of experiments and also reminds me of supplies that may have become buried in the ‘stash’ of stuff on the shelves. After all, my studio doubles as a guest bedroom. 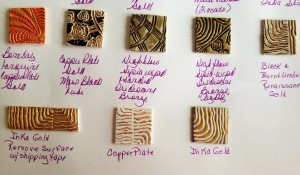 Posted in bracelet, polymer, what if, work in process | Tagged belle armoire jewelry, Dr.Ph. Martin Copper Plate Golc, laurie prophater, ornamental elements, polymer, what are you working on this week, what if | Leave a comment

In the Saturday, June 3rd, edition of the Wall Street Journal, Amanda Foreman, describes a short history of color chemistry, as well as the accidental discovery of a new blue from a chemistry lab at Oregon State University.

“In 2009, a graduate student working in a chemistry lab at Oregon State University accidentally created a new, brilliantly blue pigment while experimenting with manganese oxide and other materials. Dubbed “YInMn blue” after its chemical makeup, the pigment quickly spurred a research paper and a patent application.”

In May, Crayola announced a contest to name the new blue, as well as a flashy video campaign as part of the introduction.

All of this meshes very nicely with the summer issue of The Polymer Arts Magazine…Color.

WOW…it has been a long time since I posted and a great deal has happened since that last April Fools Day post. On April 4th I was diagnosed with breast cancer and my focus has been wrapping my head around the diagnosis and treatment. The prognosis is excellent and my doctor tells me I am doing exceptionally well. Side effects have been minimal and I am finally back in the studio…so far nothing worth sharing.

Shortly before my chemo started, I received fabulous news from Belle Armoire Jewelry that my spoke bracelet is the summer issue cover. The issue also includes a beautifully photographed article, which includes 7 pages of instructions and step out photos.

No promises…but I hope to post at least once a month. Besides, I have a new phone that I want to ‘play’ with…maybe even a video or two. Alice Stroppel assures me I can do video…!!!!!!!!!!